Unlike fantasy RPGs, sci-fi RPGs are something I’ve done more of, and also something of a interesting point because of where you put the border of sci-fi.

Demon Hunters: A Comedy of Terrors or Conspiracy X could be classed as sci-fi because they uses advanced fictional technology, but I’d be hesitant to class them as such because they’re based in the modern era and I associate sci-fi with being out in space which isn’t anywhere near being a requirement for good science fiction.

In a more comfortable definition of sci-fi, I still have room for favourites. My first RPG (and still somewhat of a favourite) was Star Wars (West End Games) or at least was based on it. As part of the Imperial Order, I gathered a group of friends online all across the world and roleplayed with them on a nightly basis. Those rules were a little ridiculous, but that factor probably arose from no one going “what if someone put all of these factors together” or not thinking about difficulty scaling. For reference, I had around 13 d6 to roll for starfighter piloting in my TIE Defender, with a result of 20 being a “heroic” feat that could achieve just about anything – my average roll was in the 30s.

The Warhammer 40,000 roleplaying games by Fantasy Flight Games are favourites as well. Between Dark Heresy, Rogue Trader, Deathwatch, and Black Crusade, I’ve had a lot of fun playing and running those games – you can do some ridiculous stuff when you get to max level Ascension…

I also love the look of the Serenity roleplaying game, though I would have to get a second copy to roleplay with as the copy that’s been signed by 7 of the main cast isn’t going anywhere near a gaming table full of snacks.

So there you have it – some of my favourite sci-fi games without even a brief jaunt into the world of LARP for a change.

I found Enforcer to be an interesting book. It follows three major points in Shira Calpurnia’s early career as an Arbitor Senioris on Hydraphur. A native of Ultramar, she finds the complex politics of Hydraphur nobility to be a strenuous endeavour she’d rather not have to deal with, but as a faithful daughter of Ultramar, she knows her duty.

As an Arbitrator, she deals with criminals and infractions above the normal call of beat cops, such as heresy, disputes over warrants of trade and assassinations of high-level Imperial officials.

The style of the books is a bit odd compared to other 40k novels, it just seems to flow differently. I quite liked the books, and the stories – Calpurnia’s blunt style juxtapositioning with the flowery and subtle politicking of Hydraphur nobility works quite well, emphasising the difference between the various classes of the 40k universe.

One thing I found jarring was the differences between what Farrer has written as being Adepus Arbites protocols, ranks, etc and what I’d come to know from the Dark Heresy RPG (hardly the most reliable source, right?).

The always-do-the-right-thing vibe can get draining after a while, especially in the third book Blind. Blind is really quite slow to get going, but picks up a lot once it does.

This is definitely a book I should have written something about after I finished it instead of two months later.

I liked the trilogy, and the data fact sheets with extra information after each book was a nice touch. It’s just not as good as the Dan Abnett books. I would happily lend it to anyone interested in it.

For those of you interested in No Rest for the Wicked, the second book Crossfire has an outlook on how one Rogue Trader dynasty operates, focusing on the inheritance of the warrant after the head of the dynasty dies.

I like the Gaunt’s Ghosts series. They’re gritty, hard, and while the Tanith often survive against impossible odds and show improbable skill for mere Guardsmen, they do hurt and they do die. The characters seem real to you and you get to know them.

Gaunt, in particular, has his flaws, but he’s a good man and a good commander who doesn’t often get the reward you think he should.

With that said, I didn’t like Salvation’s Reach as much as I did the others. Maybe it’s because I read the others in their omnibuses and now I’m reading them separately, but the story didn’t seem to end well. It just kind of stopped where I expected there to be more.

Admittedly, they had achieved their mission objectives and that part of the story was done, but it didn’t feel like it was a good ending there.

Right up until it stopped, I was enjoying the book. The Ghosts off on a secret mission with the aid of Space Marines is quite a cool story in itself. Throw in the sub-plots about (spoiler: Gaunt’s son) and Meryn’s underhand schemes and you’ve got a solid story. It was one of the books where they go in hard and not everyone survives. The Tanith are thinning down, and there weren’t that many to start with.

I liked the book, I liked Gaunt’s dalliance and his obliviousness to the feelings of others. I liked the ridiculousness of a marching band joining the elite commando regiment. I even liked the double-headed cyber-eagle.

I considered doing these as separate posts, but considering that I read them more or less one after the other, I didn’t see the point. (Delay only due to shipping times)

Ciaphas Cain is a Commissar of the Imperium. He is respected by the soldiers he serves with, honoured by Generals, a friend of the Warmaster, an ally of the Inquisition, and generally has a fairly decent life. Well, apart from the fact that everyone’s shooting at him. The thing is, is that Ciaphas is a bit of a coward. Every time a fight’s about to break out, he finds an excuse to go somewhere else. He’s spent his entire life trying not to get killed (a tricky job for a Commissar). Because of this, he’s ended up liked by the soldiers he looks after (because if they like you, they’re less likely to shoot you by “accident” during combat) and has found a large number of enemy holdouts, secret rituals and nests by looking in the place he thought they wouldn’t be (because if they weren’t there, he wouldn’t get shot at).

Lauded a hero because of his string of wins due to luck and accident, he ends up trapped in the role, finding that he has to maintain the façade of being a hero in order to not suffer that friendly fire incident later on. On the bright side, this means that he regularly dines with the finest officers in the Guard, and can usually get away with some plush assignments. On the other hand, when you’re an experienced hero, they keep wanting to send you into danger as well… 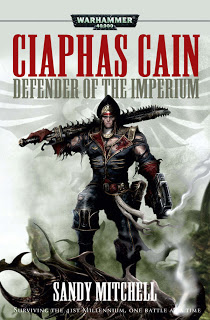 The books represent Ciaphas’ memoirs, which have been put into some sort of order by Inquisitor Amberley Vail. They tend to ramble, and be rather self-centred, but that adds to the charm. The books are a reminder that even in the grim future of the 41st millennium, there can still be humour. Cain is a likeable character, and it’s easy to emphasise with him and some of his ordeals. The excerpts added to his memoirs to flesh out parts that he’s missed (like the entire rest of the war) add a side note to that as well. Vail’s commentary is also a feature I liked, especially her fervent hatred of ex-soldiers making memoirs by battering the language into submission until it says roughly what they want it to (Cain not being among these).

If you like Warhammer 40,000 and you don’t mind a bit of humour in your grim future, then I’d recommend these to you. If you’ve not tried reading 40k novels before, I’d say they wouldn’t be a bad place to start.

ETA: So, I might have left out why I liked the books. They’re funny, Amberley’s snide comments are often hilarious, and they’re a reminder that not everything is about war, and not everyone in the 40k universe is a professional soldier (even when they are a professional soldier). The books could have been written in a third-person point of view as would be normal, but that wouldn’t be as entertaining. This isn’t Cain’s biography, this his his collected memoirs – the truth behind the hero where he tells you all of his flaws and how his greatest victories have often been achieved out of a desire to save his own skin.

He raises an army to free a planet in order to provide more meatshields to hide behind. He finds the safehouses of cultists by going to the least likely target so he’s less likely to get shot at. He stumbles upon a genestealer infestation by going to check a soldier’s story about being at a brothel. It’s his failings that make the stories enjoyable, and it’s his frank retellings (including his opinions of other officers) that make it worth reading.