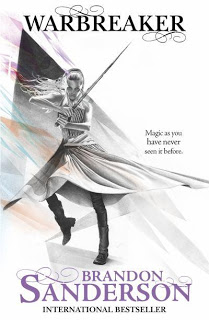 I found Enforcer to be an interesting book. It follows three major points in Shira Calpurnia’s early career as an Arbitor Senioris on Hydraphur. A native of Ultramar, she finds the complex politics of Hydraphur nobility to be a strenuous endeavour she’d rather not have to deal with, but as a faithful daughter of Ultramar, she knows her duty.

As an Arbitrator, she deals with criminals and infractions above the normal call of beat cops, such as heresy, disputes over warrants of trade and assassinations of high-level Imperial officials.

The style of the books is a bit odd compared to other 40k novels, it just seems to flow differently. I quite liked the books, and the stories – Calpurnia’s blunt style juxtapositioning with the flowery and subtle politicking of Hydraphur nobility works quite well, emphasising the difference between the various classes of the 40k universe.

One thing I found jarring was the differences between what Farrer has written as being Adepus Arbites protocols, ranks, etc and what I’d come to know from the Dark Heresy RPG (hardly the most reliable source, right?).

The always-do-the-right-thing vibe can get draining after a while, especially in the third book Blind. Blind is really quite slow to get going, but picks up a lot once it does.

This is definitely a book I should have written something about after I finished it instead of two months later.

I liked the trilogy, and the data fact sheets with extra information after each book was a nice touch. It’s just not as good as the Dan Abnett books. I would happily lend it to anyone interested in it.

For those of you interested in No Rest for the Wicked, the second book Crossfire has an outlook on how one Rogue Trader dynasty operates, focusing on the inheritance of the warrant after the head of the dynasty dies.

It’s been a while since I posted. It’s not that I wasn’t reading, but that I couldn’t quite find the energy to post. And then I procrastinated. But enough about that.

I’ve been re-reading the X-Wing series recently. All but two of the books, but that’s because I’m missing my copy of The Krytos Trap and reading The Bacta War without it doesn’t quite seem right.

I have the utmost respect for Aaron Allston as a writer; the Wraith Squadron books are – in my opinion – by far the best books in the series. He brings in a new squadron of rejects, shapes them into an elite unit and weaves their own story that fits beautifully into the universe. My only real regret is that there’s no real mention of Wraith Squadron after those four books other than a cursory mention in the New Jedi Order series.

Stackpole on the other hand… At one point, I had him listed as my favourite author in the Star Wars universe. In hindsight, I think this is due to the same youthful infatuation that causes Twilight to be so popular. Stackpole’s X-Wing books are less about Rogue Squadron and more about how awesome Corran Horn is.

Where Allston switches perspective regularly between core characters such as Wedge Antilles, Garik ‘Face’ Loran, Kell Tainer and Lara Notsil (aka Gara Petothel aka Kirney Slane), Stackpole tends to relate stories only from the perspectives of Corran Horn (recollecting his tales of emo woe) and Wedge (with the exception of cases where neither is involved), and even then focusing on Corran except where Corran’s not involved.

The idea has occurred that Stackpole mostly wrote the X-Wing books to give credence to his epic “I, Jedi” that would follow them. I just find it a shame that the Rogue Squadron books seem so focused on Corran that it skews my enjoyment of the books. Especially since I’ve always enjoyed reading the series.

If you haven’t read them, I would recommend them. They’re worth the read – especially the Wraith Squadron books. Just watch out for Stackpole’s obsession with Corran.