This is a system that’s been getting discussed for a while. It’s a resolution system designed to be used for systems such as New World of Darkness in a LARP environment. You start with a full deck of playing cards (standard 52-card deck + the jokers [hence 54]). You then follow the below pseudo-code.

It’s not so difficult to understand.

This has been a while in coming, but I’ve been busy and tired and updating this blog was far from my mind. Which may be a mistake, all things told, but that’s a different story.

I enjoyed the event, even if I didn’t feel like I did a lot. (It was very hot.) Had fun in the battles, though I did come very close to dying – far too close for any kind of comfort.

My makeup plan worked out alright and my kit worked out quite well. I found out on Sunday that apparently I’d been being referred to as “that Suaq guy” all weekend by other people so apparently I portrayed being a Suaq better than I thought – might have been the hood I had up all weekend.

Need to work out what I want to be doing with the character. Didn’t do any rituals with the character, and felt the lack of spells when I was doing combat. May shift from two weapons to rod and shield and pick up a healing spell.

On the bright side, I’m well on the way to memorising all of the runes now.

Not really a film, but I saw it in the cinema (a while ago), so it’s like a film. Me and Sarah saw a live broadcast of the performance at the Manchester International Festival from the comfort of our local Cineworld.

Though having seen it, being there might be worth the trek to Manchester. It’s in a converted (and de-consecrated) church, with stalls for the audience running down the length of the church with gaps for the performers. Backstage for this performance is more “behind-the-audience” for the most part, it seems. The central floor is mud and earth and the performance began with rain pouring down over the combatants as they fought in the mud for the glory of Scotland.

The witches were a stunning performance, and I especially liked the demon ritual they did – have to use that for something else.  Ray Fearon’s performance as Macduff stole the show, and you really felt the emotion pouring from him in his soliloquy.

It was a breathtaking performance, full of energy and tension. I heartily recommend anyone see if they get the opportunity. It’s still being screened in some cinemas.

The Twenty Thirteen theme I just shifted to with the latest WordPress upgrade supports all of WordPress’ post formats with different colour backgrounds. I’m not quite sure if I’ll use any of them, but thought I’d try out the “aside” format with an aside. 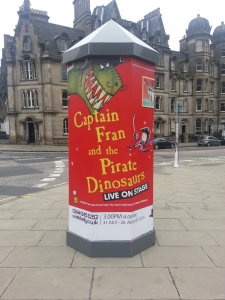 I’ve been seeing this around town for a while. I made an improvement in PhotoShop. (The actual name is Captain Flinn and the Pirate Dinosaurs.)