I like the Gaunt’s Ghosts series. They’re gritty, hard, and while the Tanith often survive against impossible odds and show improbable skill for mere Guardsmen, they do hurt and they do die. The characters seem real to you and you get to know them. 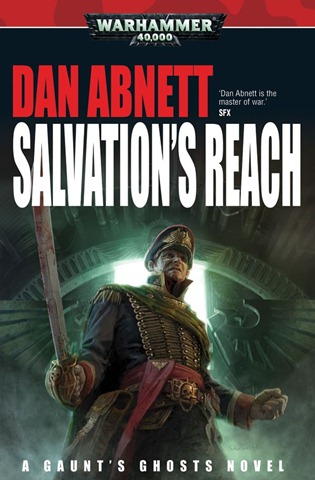 Gaunt, in particular, has his flaws, but he’s a good man and a good commander who doesn’t often get the reward you think he should.

With that said, I didn’t like Salvation’s Reach as much as I did the others. Maybe it’s because I read the others in their omnibuses and now I’m reading them separately, but the story didn’t seem to end well. It just kind of stopped where I expected there to be more.

Admittedly, they had achieved their mission objectives and that part of the story was done, but it didn’t feel like it was a good ending there.

Right up until it stopped, I was enjoying the book. The Ghosts off on a secret mission with the aid of Space Marines is quite a cool story in itself. Throw in the sub-plots about (spoiler: Gaunt’s son) and Meryn’s underhand schemes and you’ve got a solid story. It was one of the books where they go in hard and not everyone survives. The Tanith are thinning down, and there weren’t that many to start with.

I liked the book, I liked Gaunt’s dalliance and his obliviousness to the feelings of others. I liked the ridiculousness of a marching band joining the elite commando regiment. I even liked the double-headed cyber-eagle.